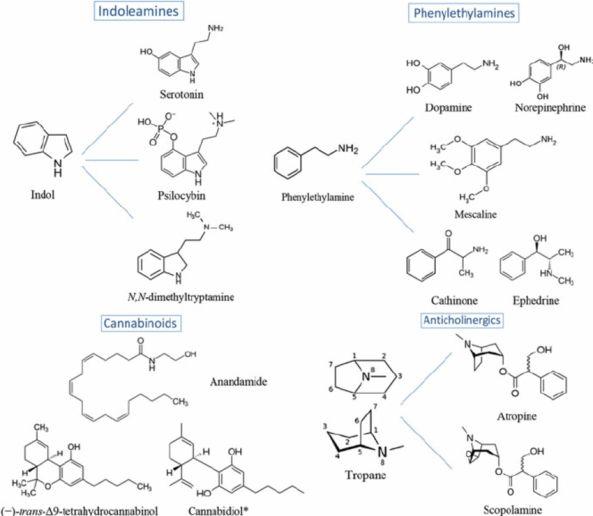 The following is a compilation of documentaries and news clips that discuss the medical potential of various psychedelics.

Unless otherwise stated, I take no credit for any of the videos listed and have provided links and or credit to the original youtube channel from which they were found. Note that these are listed in no particular order.

Why Psychedelic Drugs are Having a Medical Renaissance (8 1/2 min)
PBS News Hour special on Psychedelics in a medical setting. Here they discuss MDMA (Ecstacy) and Psilocybin (Magic Mushrooms) for patients and veterans with PTSD.

How LSD and Shrooms Could Help Anxiety, Addiction, and Depression (5 min)
Vox news clip covering the medical and therapeutic possibilities with both LSD and Magic Mushrooms.

Johns Hopkins Psilocybin Project: Psychedelics Research History & the Mystical Experience (51 min)
Great documentary on the research on psychedelics being done at Johns Hopkins University. Discussed are Dr Roland Griffiths research which is supported by the National Institute on Health (NIH), both LSD and Psilocybin, and first hand accounts of psychedelic experiences and trips by those interviewed.

Dr Martin Williams – Psychedelic Medical Research in Australia: The Long and Winding Road (34 min)
Excellent lecture by Dr Martin Williams who discusses psychedelic medical research at the University of Melbourne. He provides historical context, some of the science behind various psychedelics, and possible therapeutic uses.

Ayahuasca — Visions of Jungle Medicine: Adam Oliver Brown at TEDxUOttawa (18 min)
TED lecture by Dr. Adam Brown where he discusses the medical potential of Ayahuasca. He also discusses his journey with shamans in the jungles of Peru, where was able to undergo the traditional ceremony and experience with the potent psychedelic brew.

Psychedemia – The Psychedelic Conference Documentary (1h)
Comprehensive 1 hour documentary on psychedelics. Various doctors, researchers, and scientists are interviewed and topics ranging from various psychedelic substances, neuroscience, mystical experiences, all the way to shamanic healing are covered in a scientific light.

Shrooms, LSD, and Legit Uses of Psychedelics in Treatments (6 1/2 min)
Concise educational clip by the Healthcare Triage that compares psychedelics to medical cannabis’ status as a schedule I drug, how they can be used in a medical setting, and potential risks with taking psychedelics.

Note that this is just a short list of research material on psychedelics in a medical capacity. There are far more documentaries, videos, and self testimony success stories that can be found on youtube and various news outlets. There will also be another section dedicated to psychedelic history, compilations of works by McKenna, Leary, Huxley, and much more!

Just got out of my physical exam for my back. First pic new results, next two are from 32 days ago. Accelerated and rapid healing - at 90% in half the expected time. Dr Sun did amazing work, his team in Campbell is astonished at how quickly a bad injury like my back can heal. Cannabis oil and healthy noninflammatoey foods twice a day, meditation twice a day - it is definitely possible to speed up healing with proper meditation practices. You should check out the works of Dr Joe Dispenza if youre interested. Also as an aside, I read a shit ton of books, more so with the quarantine going on. Ill share good reads in future posts! #acceleratedhealing #rapidhealing #cannabisoil #meditation #chiropractic #joedispenza Edit: Also, #zeropainkillers, #zerosurgery, #zeroopiates, #zeroibuprofen ✌️
Saturday morning training. Backs feeling fine ;) #bareknuckleconditioning #muaythai #elbows #knees #kicks
Accelerated healing. So this was my back a little more than 30 days ago. I took a hard fall on the ground you see in picture 3 screwing up spinning aireal moves. Multiple nerve pinching and subluxation along multiple sections of my spinal column (obviously the red in the thermal imaging is really bad). 4 weeks into chiropractic treatment (half of the 8 week therapy) I’m already back at 90%. Some of you saw my training vid from earlier in the week ;) Zero painkillers, zero Rx meds, fuck surgery. The secret? It may or may not surprise you, theres several factors: yep cannabis oil and herb twice a day as you see in picture 9, but also daily intake of healthy antiinflammatory nutrients (among other properties) - herbal greens and even mushroom complexes (no not the psychedlic kind but you can bet they help with other things as well). Pic 9 has all the stuff I take daily and you can find those supplements on amazon; they’re affordable as well. The cannabis herb when eaten helps to upregulate the endocannabinoid system (ecs) which can indeed speed up healing. And no I don’t do steroids. The final factor is meditation. Twice a day. Why meditation? The production of corticosterol (the inflammatory stress hormone) is halted and you trigger alpha and delta brainwave states that help to accelarete your physical healing. The human body does indeed have the ability to self regulate and heal itself. If youre interested in more about meditation you should all check out the work of Dr Joe Dispenza on youtube, or look up his books and papers. Ill share more about self and accelarated healing in the future, theres a ton of good material out there on it!! If you think I’m full of shit l’m laughing at you ✌️#selfhealing #nosurgery #nopainkillers #noibuprofen #noopiates #cannabis #nutrition #meditation #healthiswealth #acceleratedhealing #rapidhealing